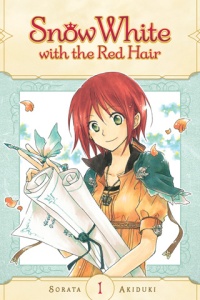 Despite its title, it would be a stretch to call this manga an adaptation of Snow White. There’s no evil queen, dwarves or magic and the only plot element the two stories seem to share is a poisoned apple. Rather, this is a fairytale-esque story that borrows a few elements here and there, but imbues the setting and characters with a modern sensibility. Instead of a naïve princess, the protagonist is an independent young woman with a career and, rather then a whirlwind romance, she slowly builds a romantic relationship that’s based on a foundation of friendship.

Shirayuki is a herbalist with unusually bright red hair. Her unique looks draw the unwanted attention of Prince Raj, who demands that she become his concubine. Instead of submitting to his demands, Shirayuki flees her home and attempts to escape into the woods of the neighbouring kingdom. There she meets a young man named Zen, who realizes that she’s on the run and offers her a place to stay. The two start to form a flirtatious friendship, but Prince Raj hasn’t given up. What will Shirayuki do when her new friend’s life is put in danger by the dastardly prince?

According to the authors notes, the first chapter of this manga was originally conceived as a one-shot and the decision to turn it into a series was made later on. The fact that this was imagined as a one-and-done story is apparent and the first chapter is the weakest part of the book. There isn’t a lot of time devoted to character development or to building any kind of tension, romantic or otherwise. Prince Raj is portrayed as being too much of a doofus to seem like a credible threat and our two leads don’t have much in the way of chemistry, partially because they are both, initially, not very compelling. Shirayuki has gumption and is very pragmatic, but she seems so calm about her situation for most of the chapter that she’s hard to relate to. For his part, Zen is a pretty generic male love interest. He seems confident and a bit brash but is a little shy when it comes to romantic situations… Yawn! I feel like I’ve seen this type of character a hundred times. The first chapter isn’t a bad opening per-say, it’s just uninspired and, if this was all I had read, I would have been surprised to hear that this story was chosen to be expanded into a series.

Thankfully things improve from here. Shirayuki and Zen are faced with more interesting challenges in the later chapters, as we get hints of political intrigue and Shirayuki is given a test of her herbalist skills. As the manga progresses, Shirayuki begins to shine as the main character. She settles on a goal and works towards it with determination, and in the process proves herself to be brave, clever and indominable. Her relationship with Zen also becomes more endearing over the course of the book. He’s supportive of Shirayuki’s pursuit of her career, listens to what she has to say, respects her decisions and is never overbearing. While tumultuous or combative relationships can add more tension and drama to a story, it’s nice to see a sweet romance like this one where the characters just genuinely seem to like each other and are content to let things develop gradually.

This manga got off to a slow start, but it built up steam with each chapter and I found myself having more and more fun as it progressed. With likeable characters and a charming romance, this is a series that has a lot of potential, and I plan to pick up the second volume once it’s released.

What did you think of this manga? Have you watched the anime adaptation? How do you think the two version compare? Let me know in the comments.

Also, be sure to check out some of my other shojo manga reviews: