Check, Please! began as an online comic and this volume collects the first half of the story, with updated art and some fun extras to give you added bang for your buck. I hadn’t heard of the webcomic when I first picked this book up, but I was drawn to the cute art style and the promise of a touching romance… and maybe hockey?

Eric Bittle, a.k.a. Bitty, is a former figure skater turned hockey player who is entering his freshman year of college. He has been recruited to play on the school’s hockey team and he records a video blog where he shares updates on the trials and tribulations of his team, his growing crush on the team’s captain, Jack, and also baking tips and recipes.

I feel that I should warn people expecting a sports story that, while there is definitely some hockey in this comic, the main focus of the book is on the various interpersonal relationships of the team and on the growth of our lead characters. This is a coming of age story and a romantic drama, college hockey is mostly just the backdrop. This book covers Bitty’s first two years at college, and during that time our young protagonist tackles a number of challenges, both on and off the ice. His high school hockey team didn’t allow checking and, given that he is on the small side, Bitty struggles with severe anxiety about getting hit during a game. Off the ice, Bitty also deals with coming out to his teammates and initially has a tense relationship with Jack, who is dealing with a slough of personal issues of his own. Through it all Bitty always manages to treat others with kindness and empathy and it’s rewarding to see the comradery between him and his teammates grow as Bitty carves out a place for himself amongst them. 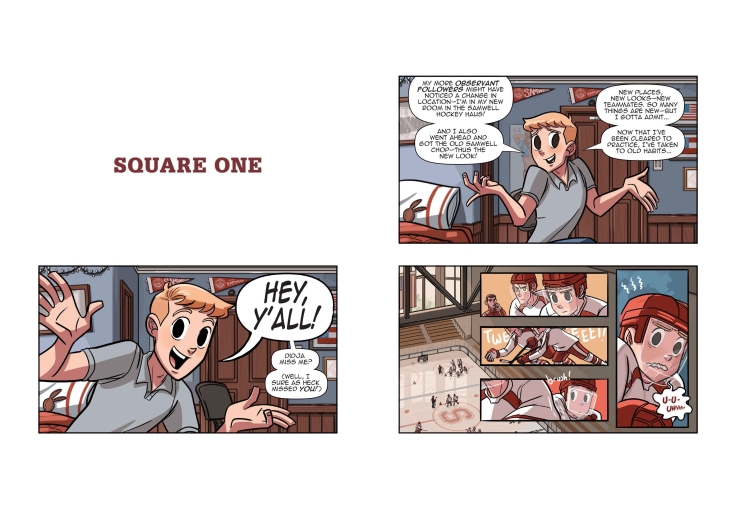 In addition to our loveable lead, Check, Please! also has a strong cast of secondary characters, including Jack, Bitty’s love interest. Jack starts out intense and even a bit dickish, but grows significantly over the course of the book. He puts a lot of pressure on himself and wants to win so badly that he gets tunnel vision. This leads him to make some poor decisions and he ends up getting a wake-up call around the mid-point of the book when one of his plays ends in disaster. After that, Jack starts making some changes and learns to ease up. He and Bitty also start getting closer and the evolution of their relationship from teammates, to friends, to something more is romantic and sweet. I’m looking forward to seeing how their relationship continues to progress in Book Two.

As I mentioned at the start of this review this book features a number of extras, my favourite of which is the definition section, where Ransom and Holster, the team’s defensemen, hilariously explain various hockey slang. Holster and Ransom are probably my favourite characters in the book, despite receiving minimal development and mostly just being there to provide comedic relief. They are just the bestest of friends and I love them! Their definitions are also surprisingly helpful if, like me, you don’t follow or ever watch hockey (I know, I’m a terrible Canadian). Also included in the extras is a mountain of tweets from Bitty’s Twitter account that act as a supplement to the main narrative. I tried to read through them all in one go and this wound up being a slog. There is some fun stuff in there though, so I recommend trying to read through these bit by bit while you’re reading the main story.

Much like a delicious pie, Check, Please! is a warm and sweet story. With plenty of humor, romance and a dash of hockey, there’s never a dull moment in Bitty’s college career. I’ve really enjoyed this first volume and I’m looking forward to seeing where things go in book two.

What did you think of this comic? Be sure to let me know in the comments!

Be sure to check out my thoughts on the second volume:

Also, please check out my reviews of some other LGBTQ+ friendly comics: