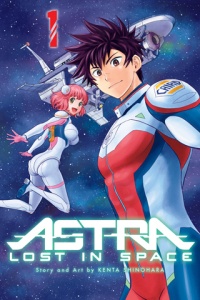 I feel like I’m arriving a bit late to the party when it comes to Astra Lost in Space. I haven’t watched any of the anime yet, but it’s been receiving such positive buzz that I decided to give the original manga a try. The manga has been fully released in english and is only 5 volumes long, so I was able to read through the whole thing pretty quickly and it proved to be a tightly plotted and exciting sci-fi/survival story full of action, intrigue and featuring a strong ensemble cast.

In the year 2063, humanity has perfected interplanetary space travel to the point that traveling to another planet for recreational purposes is a common occurrence. Nine students are about to embark on planet camp, a trip organized by their high school where they will get to camp on a nearby planet without any adult supervision for 5 days. Not long after they arrive on the planet, however, things go terribly awry. The kids encounter a strange ball of light that sucks them in and spits them out into outer space! Luckily everyone still had their spacesuits on and, even more fortuitously, the kids find an abandoned spaceship and manage to all get aboard, but it turns out that they are now many light years away from where they were. Unable to call for help and lacking sufficient supplies to make the full trip back home, the kids are close to despair, but Kanata, who lived through a harrowing survival situation as a young boy, convinces everyone that if they stay calm and work together they can find a way to make it back. The group comes up with a plan to hop from planet to planet, picking up supplies as the go, so that they can slowly make their way back home. Over the course of their journey, the kids experiences many hardships and form close bonds as they work together to survive on dangerous alien worlds and struggle to keep their spirits up, but there are still a lot of unanswered questions regarding how they got into this situation in the first place. Evidence starts to build up that implies it might not have been a random accident, but an intentional attempt to kill them. What’s more, whoever is trying to murder them might have a co-conspirator hidden in their group!

Reading through the authors notes included in Astra lost in Space reveals that the mangaka originally had conceived this as being a longer series that would have included 15 main characters instead of 9. While I certainly would have enjoyed reading more volumes of this series, I’m glad that the decision was made to par down the cast. Over the course of the manga, all nine characters had their moment in the spotlight, and I’m not sure if that would have been possible with a larger cast. I never felt that any of the lead characters were under-utilized and everyone had a role or a skill that came into play at some point over the course of the journey. What’s more, the group dynamic that formed as the kids all got to know each other and became friends was both fun and heart-warmings. I really ended up loving all of these characters, even the ones that started out a bit annoying at the beginning grew of the course of the adventure and I found myself endeared to them by the end. The only character that I felt could have used a bit more development was Funicia, the younger, adopted sister of one of the girls in the group, who was initially included on the trip to give the teens the added challenge of having to care for a younger kid. Funicia is sweet and cute, but that’s about all there is to her character. Considering that she’s supposed to have just recently lost her parents, I would think that she would be struggling with a lot of difficult emotions, but we don’t really get to see any of that. Her, initially, rocky relationship with her new sister gets focused on, but I would have liked to have seen a bit more of her dealing with her grief. Aside from that though, this is a strong cast of characters and the mangaka did an excellent job balancing things so that each character received development or time devoted to their backstory over the course of the fairly short run of the series.

Plot wise, the story also benefits from the shorter length. No part of this manga feels like padding; each chapter we either learn new things about the characters or receive new clues to the various mysteries that crop up over the course of the series. Each of the planets the kids visit are also made to feel distinct and memorable, with plenty of thought having gone into the various eco-systems and the types of life that would have evolved in that environment. This is a science fiction story with just enough science fact to add verisimilitude, without bogging down the flow of the narrative with tedious details. I found myself completely drawn in as the kids explored each new world and encountered unexpected dangers around every turn. The survival elements of the series provide a constant source of tension, as the kids need to find new sources of food and have limited supplies to handle things like injuries or to make repairs to their ship. What’s more, the possibility of a traitor lurking in their midst adds an extra layer of suspense, as no one knows when this enemy might strike again. With new challenges around every corner, and hints and red herrings to the various secrets at the core of this story sprinkled throughout, each chapter feels exciting and engaging.

The various pieces of this manga all work together beautifully. The characters, the mystery, the action and the survival elements all come together to form a truly compelling and moving story. This series is something special and I’m very glad that I decided to give it a try. Astra Lost in Space is one of the best shounen manga I’ve read in years and I can’t recommend it enough.

Be sure to let me know you thoughts on the manga in the comments and if you’ve watched the anime, let me know how you think the two versions compare!