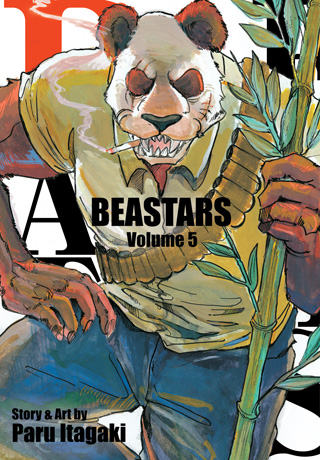 I think that this might be the most intense volume of the Beastars manga yet! It’s certainly the most violent! Fair warning, this review will include some spoilers for earlier events in the series, and possibly for the anime, which I still haven’t seen.

Haru has been abducted and the calling card found at the scene of the crime points to the culprits being the infamous Shishigumi, a dangerous gang of lions known for killing herbivores and stringing up their bodies outside their headquarters. The mayor, also a lion, assures the students that he’ll rescue her but, instead, takes steps to bury the story in order to protect the public image of lions and his own reputation. To these ends, he blackmails Louis into helping him to keep things quiet, threatening to expose his past if he doesn’t comply. Seeing that he can’t rely on the authorities or his classmates for help, Legoshi sets out to track down and rescue Haru on his own. Meanwhile, Haru finds herself in a very precarious situation, as the boss of the Shishigumi is convinced that herbivores with pure white fur have the most delicious meat and intends to devour her!

Beastars has been a dark series from the get go, the first volume opens with a murder, after all, but I feel like I should give people a warning that this volume ratchets the darkness up a few notches. The leader of the Shishigumi apparently believes that humiliation will make Haru’s meat tastier and orders her to fully strip for him, so that he can inspect her body and confirm that her fur is indeed, pure white. It’s a pretty disturbing scene and readers who might be sensitive to this kind of content should go in prepared.

This is also the most action-pack volume of the series to date, with Legoshi and Gohin, the panda psychologist who winds up joining Legoshi’s rescue mission, going toe-to-toe with a whole pride of lions in a bloody battle where Legoshi has to struggle to stay in control of his primal instincts. The real star of the volume, however, is Haru, who manages to muster her courage in the face of certain death and stand up to the head of the Shishigumi. During this heart-pounding, life or death scenario, the manga takes the time to give us new insights into Haru’s character. She looks back on her life as a small herbivore and reflects on how she had used sex as a way to feel like she was on equal footing with others – since if boys were looking at her with desire, they weren’t looking at her with pity. Then, she thinks of Legoshi and is inspired to live her last moments in a way she can be proud of. She defiantly mocks the gang-leader and assures him that she’s angry, not ashamed, and that her flesh will be too tough to make a tasty meal. It’s a fantastic sequence, as, not only do we learn what has made Haru the person that she is, but we also see her true strength on full display!

While Haru shines brightly in this volume, in spite of the dreadful circumstances she finds herself in, Louis seems to be crumbling under the pressures of maintaining his public façade whilst trying to cope with the trauma of his past. He clearly didn’t want to abandon Haru to her fate, but felt that the Mayor’s threats tied his hands.

It’s curious to me that Louis would go this far to protect his secret, seeing as he was the victim of a crime and didn’t actually do anything wrong himself. I understand that Louis can’t stand to appear weak, but was he really willing to sacrifice Haru’s life in order to avoid having people look down on him? It would seem so, although this decision has clearly taken a tole on him and he appears to be emotionally unraveling and takes some pretty extreme actions towards the end of this volume. I wonder how things will unfold for him, now that he’s in such an unstable mental place.

This was yet another thrilling entry in the Beastars series and, as per usual, I’m eagerly anticipating the release of the next volume so I can see what happens next. The characters continue to be fascinating and the writing is top notch, delivering both touching, emotional moments and exciting, dramatic turns around every corner. This has quickly become one of the series that I look forward to reading the most.

What did you think of this volume? How are you enjoying the series so far? Let me know in the comments. Be sure to check out my reviews of the other volumes in the series, as well: