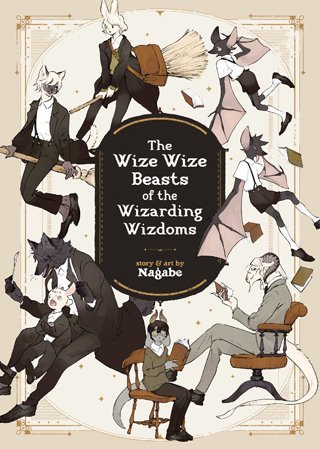 The Wize Wize Beasts of the Wizarding Wizdoms, by Nagabe, is an anthology of BL stories featuring anthropomorphized animals attending a wizarding school. It’s basically Harry Potter Fanfiction: The Manga, only less smutty then that title entails. If you’re feeling hesitant about this manga because you’re worried it will feature a bunch of animal-people getting it on, rest assured that the farthest any of the relationships featured in this book go is kissing. Sorry to be the bearer of bad news if your feelings were the opposite.

Long ago, a wonderful wizard named Wizdom saw fit to bestow human intelligence and attributes upon certain beasts, forming tribes of beings known as Demi Humans. These tribes built a school for studying magic in their creator’s honour, and there the Demi Humans diligently study wizardry… when they aren’t distracted by romance, that is.

The world of Wizarding Wizdoms is an interesting one. Humans exist, but live separate from the Demi Humans and the two groups don’t have much contact with each other. Amongst the Demi Human tribes, all sorts of animals live together in harmony, thanks to the fact that normal animals still exist and it’s deemed permissible for members of carnivorous tribes to eat them. There 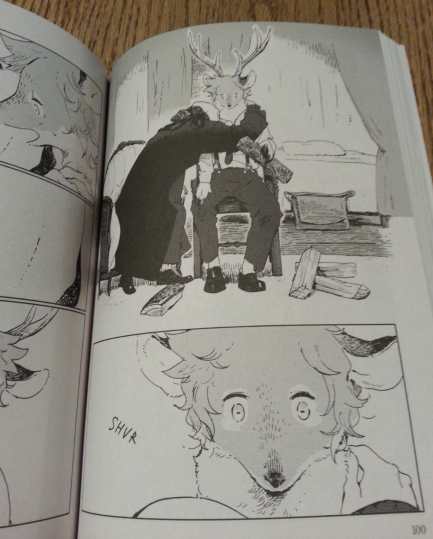 are even some mythical Demi Human tribes, such as unicorns, gryphons and dragons living amongst the normal beast tribes and everyone seems to get along. Despite taking on some human characteristics, the Demi Humans retain aspects of their animal physiology. For example, there is a story featuring a lizard student who finds it more difficult to move during the cold winter months and requires help from his roommate to get dressed in the morning, much to said roommate’s delight. This world is quite different from the less peaceful animal societies depicted in other manga series, such as Beastars, and all of these different anthropomorphized animal species are beautifully rendered in Nagabe’s lovely art style. If you’ve read Nagabe’s other manga series, The Girl From the Other Side, then you have an idea for what to expect here.

Often with anthology’s, I find there will be some good stories and then a couple of stories that are basically duds, but that’s not really the case here. Every story in this manga is solid, though I, of course, have some favourites. Huey & Doug: Courtship & Friendship, is a standout story for me, as it’s the funniest story in the collection. Featuring an arrogant peacock named Huey, who doesn’t seem to have any luck when it comes to finding a girlfriend, and his friend Doug, a crow who is obsessed with him and secretly sabotaging his chances with the ladies. Huey’s blind optimism and unflappable confidence in himself, despite numerous rejections is a delight.

On the other end of the spectrum, Cromwell & Benjamin: The Good Talker & the Good Listener, is a more emotional story. Professor Cromwell, a gryphon, always complains about his troubles to fellow facility member Benjamin, a calm and understanding unicorn. With all these hormonal, magic wielding teen animals running around the school, Cromwell has a lot to complain about, and Benjamin is always there to lend a sympathetic ear. But Benjamin is dealing with difficult problems of his own. Having been exiled from the Unicorn Tribe for his homosexuality, he is anxious that he will face more rejection if his secret were to be exposed again (It’s unclear is homophobia is a problem unique to the Unicorn Tribe, or if it permeates all of Demi Human society). Cromwell realizes that something is bothering his friend and, in a very sweet scene, offers to listen to Benjamin’s troubles for once. 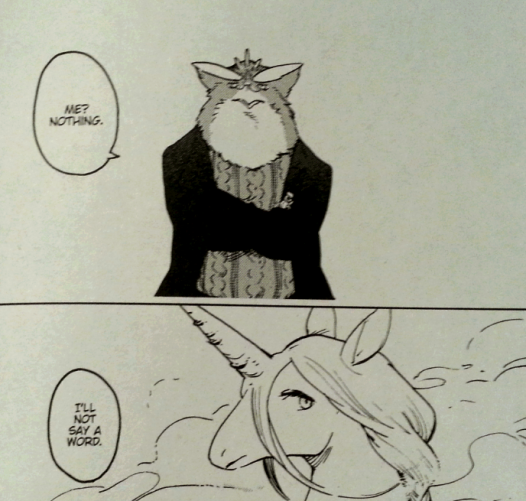 This story was another favourite of mine and I would have loved to have seen more of these characters. Unfortunately, that turns out to be a complaint that I have with most of these stories; they feel like they’re the beginnings of larger stories that we don’t get to see. Most of the relationships featured in this manga don’t really progress anywhere and there is only one couple that we can definitively say are together by the end of their story. Wizarding Wizdoms is less focused on exploring a relationship and more focused on exploring feelings: the torment of liking someone but not being able to tell them how you feel or the confusion of trying to sort out what you feel at all. This results in some poignant and well told stories that, in a lot of cases, lack a real payoff, at least in the form of a resolution to the romance. And, given that romance is the focus of most of these stories, that’s kind of anticlimactic.

While this is an exquisite looking anthology of stories that range from humourous to touching, The Wize Wize Beasts of the Wizarding Wizdoms unfortunately left me feeling like I’d just got a taste of something rather than a full meal. I suppose it’s a testament to Nagabe’s storytelling that I was left wanting more, so I would still say that this manga is worth checking out, if for no other reason than to admire Nagabe’s lovely art.

What did you think of The Wize Wize Beasts of the Wizarding Wizdoms? Are you a fan of Nagabe’s other work? Let me know in the comments section.

Also, check out some of my other BL manga reviews: